With the use of capillaries as separation columns and the construction of automated capillary electrophoresis devices, IEF has also been reformed. Due to more efficient heat dissipation in capillaries compared to classical gels, shorter separation times and better resolutions could now be achieved with cIEF (“Capillary Isoelectric Focusing”). At the same time, the possible on-line detection makes work much easier and allows quantification. Automation is easily possible.
The separation is based on different isoelectric points (pI values) of the analytes. The pI value indicates the pH value at which the respective substance is electrically neutral. Once this pH value is reached, the substance can no longer migrate in the electric field.
This fact is taken advantage of by means of a pH gradient running along the entire capillary length. The pH gradient is created by first filling the entire capillary with an ampholyte solution, which also contains the sample solution, a stabilizing medium, buffer substances and possibly urea. 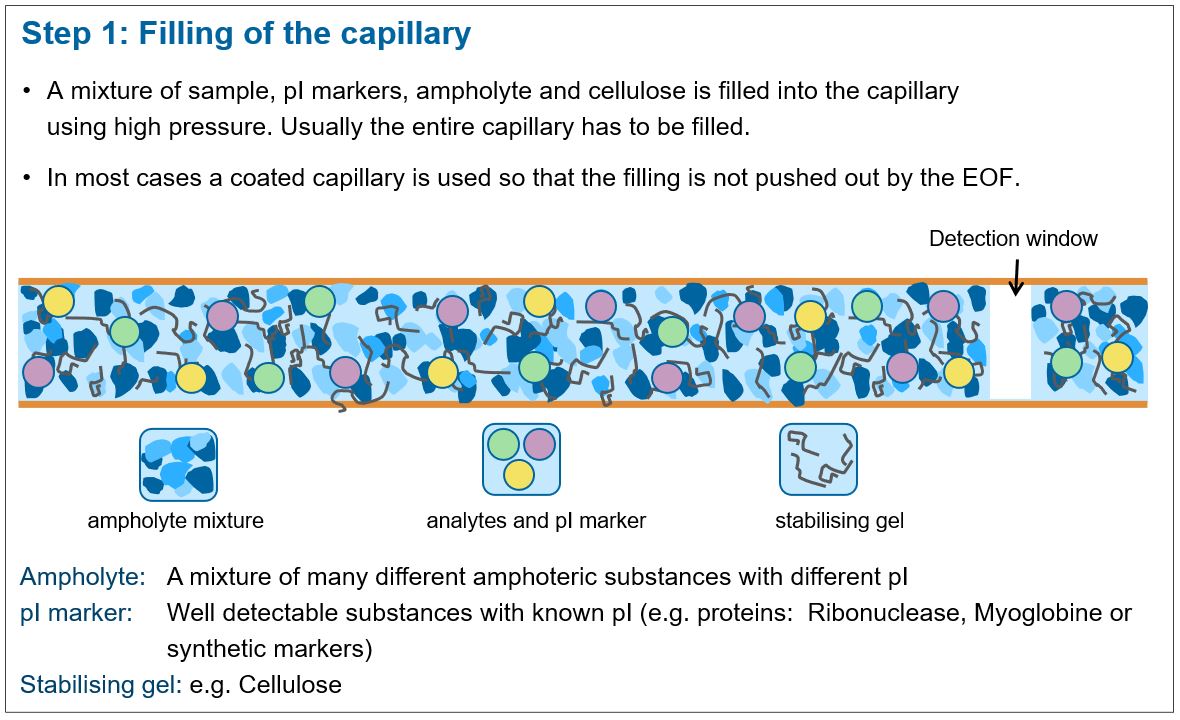 The filling of the capillary

A low pH value (e.g. phosphoric acid) is then introduced to the anode side of the capillary (positive pole), while a solution with a high pH value (e.g. diluted NaOH) is introduced to the cathode side (negative pole).
After switching on the voltage, the ampholyte filled into the capillary sorts itself according to its pI value, so that a pH gradient is built up in the capillary. In this pH gradient a sample solution can be separated according to its pI-value.

The separation in the pH gradient

Focusing to a specific point in the capillary is automatic: if an analyte leaves its own zone (e.g. by diffusion), it enters a range with a different pH value and regains an electrical charge that causes it to migrate back into its own zone (which corresponds to the pI). Peak broadening by diffusion is thus suppressed by the focusing pH gradient, so that a high separation efficiency is achieved.
The progress of the separation can be followed indirectly via the current curve. The initially high current decreases continuously and then remains approximately constant. 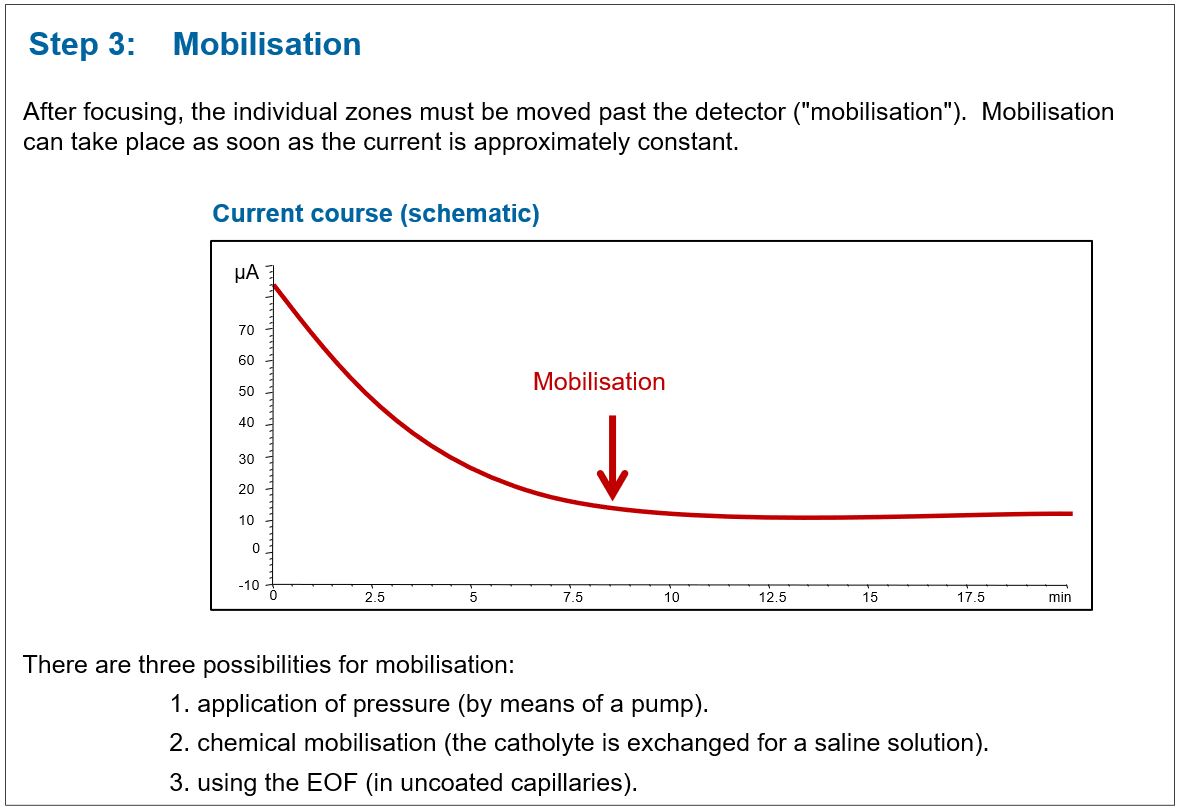 Once focusing of the ampholyte and sample components is complete, a small, constant current can flow and separation is complete. The continuity of the pH gradient and thus the separation efficiency of the IEF depends on the composition of the ampholyte solution. The individual ampholytes are zwitterionic substances and must cover the desired pI range if possible. The finer the pI gradation of the ampholyte, the better the possible resolution will be.
After separation of the sample, the entire capillary content must be “mobilized” to enable detection. In the cIEF there are basically three ways to carry out the mobilization:

After completion of the focusing process (recognizable by the almost constant current), a pressure is applied parallel to the separation voltage and the entire capillary content is thus guided past the detector.
The disadvantage is that analytes with a very high pI may be focused within the capillary path of detection and cathode. These are then flushed out of the capillary without having passed the detector. To avoid this, an ampholyte solution that fills a higher pH range can be selected. TEMED is often added to the ampholyte solution as a spacer. Alternatively, the critical capillary section could be filled with the cathode solution (diluted NaOH) to locally advance the pH gradient. In principle, both “tricks” are suitable for focusing the sample components of interest possibly even before the detector zone. When using coated capillaries, however, it must be taken into account that the coating can be destroyed by strong alkalis or acids.

A salt is added to the detector-side solution for chemical mobilization. For example, chloride ions can be added to the NaOH solution on the cathode side or sodium ions on the anode side. As a result, the pH gradient can no longer be maintained and the individual analytes and ampholytes receive a charge that now again allows their own movement in the electric field.