The schematic structure of a capillary electrophoresis system is shown in the following figure: 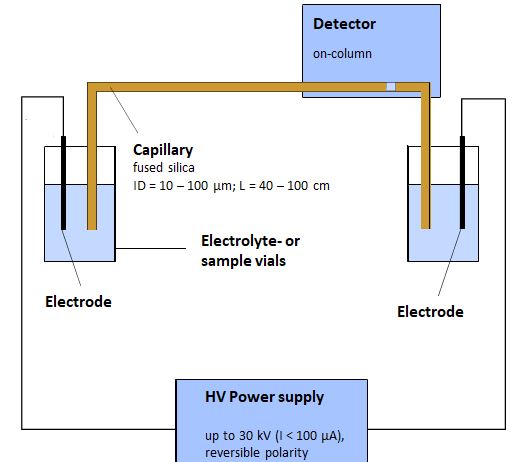 Structure of a capillary electrophoresis system

The separation is carried out in a fused silica capillary which is filled with an electrolyte solution. Usually, the inner diameter of the capillary is between 25 µm and 100 µm and the total length varies from 20 cm to 100 cm. The electrical field is created by a high-voltage power supply which delivers up to 30,000 volts. The injected sample volume is only a few nanoliters and the detection is carried out as close as possible to the capillary outlet. Due to the small capillary dimensions, particularly high demands are made on the sample injection and the detection in order to ensure a high sensitivity and a consistent reproducibility of the separation.
The separation principle of CZE is based on different velocities of the charged analytes in the electric field. The different velocities are primarily the result of differences in the charge-to-radius ratio. In an electric field the opposing forces f and F act on charged particles.

Forces during the separation

The force f draws the particle to the corresponding electrode: the positively charged ions to the cathode and the negatively charged ions to the anode. Z is the charge number and e0 is the elementary charge, that means the charge of an electron. The electric field strength E is defined as the relationship of the effective potential difference (applied voltage in CE) to the distance between the electrodes, determined by an approximation of the capillary length.

The force F results from the frictional resistance which the particle undergoes during its movement through the electrolyte solution. F is dependent upon the size of the particle, its velocity and the viscosity of the solution. When the system reaches equilibrium, the velocity is constant and is determined by the following: the electrical field strength E (depending on the applied voltage and capillary length), the viscosity of the electrolyte solution, and the charge-to-radius-ratio of the particle.

To describe the movement in the electrophoresis it makes sense to use the electrophoretic mobility µ instead of the velocity because the mobility is a specific value and it is independent of device-specific parameters such as voltage or capillary length.

The ion mobility μ is in contrast to the speed of movement, independent of apparatus parameters, substance-specific size. It can be calculated from the equivalent limit conductivities already recorded in tables for many ions.

Relationship between mobility and conductivity

Through the use of the fused silica capillaries the natural motion of the ions will be influenced by the so-called electroosmotic flow (EOF). When using unmodified capillaries the entire electrolyte solution flows in the direction of the cathode and is thus equal to the cation movement and the anion movement in the opposite direction. This must be taken into account when setting the electrode polarity so that the analyte ions migrate towards the detector under the selected separation conditions. 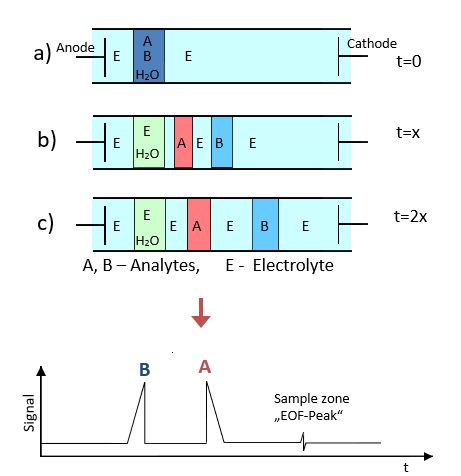 The principle of separation

The separation efficiency (N) in the CZE is influenced by several factors. It is particularly important to ensure a constant temperature since many parameters important for the separation are temperature-dependent. 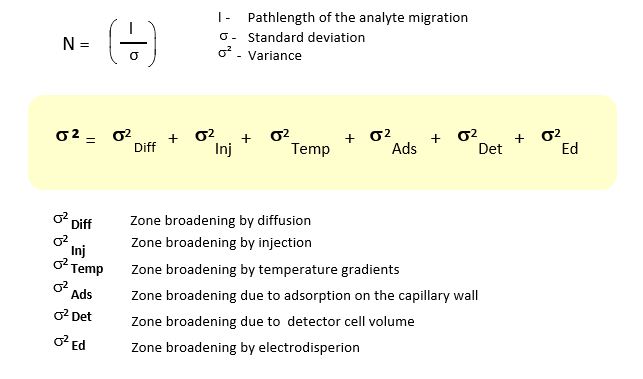 Electrodispersion effects are a cause of the different peak shapes in the CZE. Here, mobility differences between analyte ions and electrolyte co-ions and the ratio of electrolyte to analyte concentration are crucial. This knowledge can be used for separation optimization with regard to the selection of the electrolyte systems. 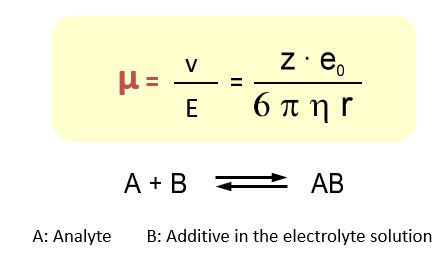 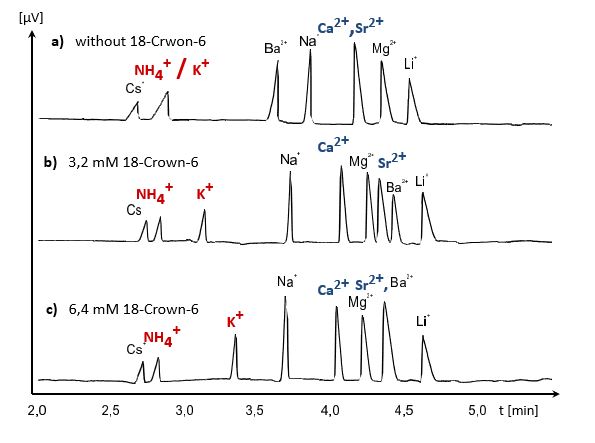 The influence of 18-Crown-6 on the cation separation

Through the pH of the electrolyte solution and the resulting change in the charge of the analyte ions, the temperature, the choice of capillary dimensionen and capillary material, and much more, electrophoretic separation can be developed and optimized quickly and efficiently. This offers the user many possibilities to influence the separation, which leads to a very broad range of analytical applications of CE. On the other hand, it is absolutely necessary to choose the optimal parameters and to keep them constant in order to ensure reproducible results.