Electrokinetic chromatography (EKC) is a combination of electrophoresis and chromatography. The introduction of a chromatographic phase serves to increase selectivity. By applying an electric field to transport the liquid in the capillary, high separation efficiency can also be achieved here. In EKC procedures, substances are added to the electrolyte which have their own mobility in the electric field. These additives are called pseudostationary phases (PSP). Due to their interaction with the analytes, a change in selectivity and thus a separation of the analytes occurs. Hydrophobic molecules such as polycyclic aromatic hydrocarbons (PAH), naphthalene derivatives or amines can be used as model substances for the investigation of systems with pseudostationary phases. Their separation is a challenge due to their structural similarity. Due to the formation of homologous series, they lend themselves to mechanistic investigations.
If the phases known from chromatography are used for the EKC, it is possible to predict the retention sequence, since the separation of neutral species follows the rules of liquid chromatography.

Figure 1: Separation principle in the EKC

The addition of PSP results in a superposition of different transport mechanisms in the capillary, see Figure 1. The first mechanism is caused by the EOF, it transports the entire volume of liquid in the capillary. Uncharged molecules therefore move at EOF speed towards the cathode. The second mechanism results from the movement of the PSP. In the EKC an interaction between the analyte and the PSP takes place, which leads to a change in the analyte velocity. To achieve a good separation of the analytes, the speed of the PSP should be as high as possible and oriented in the opposite direction to the EOF. However, the transport of the analyte to the detection window must still be guaranteed. The relative velocities occurring in the EKC are obtained by vectorial addition of the absolute velocities, this is shown schematically in Figure 2.

Figure 2: Velocities in the EKC

The analyte speeds result from different interactions with the PSP. They depend on the retention factor of the substance. For uncharged substances the schematic chromatogram described in Figure 3 is obtained.

With cathodic migration direction of the EOF, all substances that are only transported through the EOF, i.e. are uncharged and do not interact with the PSP, first reach the detector. Such species are called neutral markers; they have a retention factor of zero. In the case of an anionic (anionically migrating) PSP, the uncharged analytes then follow in the order with increasing strength of the interactions, i.e. with increasing retention factor. The last signal is caused by substances that interact with the PSP during the entire analysis time, i.e. have an infinitely high retention factor. The time between the migration time of EOF and PSP is called the migration time window.

However, the separation of highly hydrophobic substances, such as PAHs with MEKC proved to be difficult, as these analytes are almost completely incorporated into the micelles in aqueous electrolyte solutions and therefore migrate with the micelles. In general, organic solvents are added to increase the affinity to the electrolyte and thus to change this equilibrium. However, due to the lack of stability of the micelles in organic/aqueous media, this is only possible up to approx. 40% by volume [Dorsey, J.G., DeEchegaray, M.T. and Landy, J.S. (1983), Anal. Chem., 55, 924]. Better results were obtained by adding cyclodextrins (CD) to the micelle solution (CD-MEKC) [Terabe, S., Miyashita, Y., Shibata, O., Barnhart, E.R., Alexander, L.R., Patterson, D.J., Karger, B.L., Hosoya, K. and Tanaka, N. (1990), J. Chromatogr. 516, 23]. Here the solubility of the analytes is increased by the formation of inclusion complexes [Yik, Y.F., Ong, C.P., Khoo, S.B., Lee, H.K. and Li, S.F.Y. (1992), J. Chromatogr. 589, 333]. However, this method is limited to analytes that fit into the interior of the respective cyclodextrin. Figure 4 shows the separation of the smaller PAHs with ß-CD. A good match between the size of the interior of the CD and the size of the analyte leads to a stable inclusion complex and thus to a good separation from EOF (anthracene fits better than pyrene). 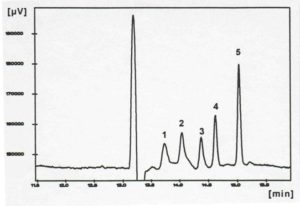 The CDs are of particular interest because of their chirality. They are therefore often used for enantiomer separation [Snopek, J., Jelinek, I., Smolkova-Keulemansova, E. (1988), J. Chromatogr. 452, 571].

Possibilities for optimizing EKC separations:
A wide range of pseudostationary phases is available to the user. The EKC is, like the other capillary methods, a robust method.